Skip to content
You are here
Home > Windows > Your smartphone: Windows 10 can now even make calls

“Your smartphone” enables access to the cell phone on the PC – without having to take it in hand.

Although Microsoft has long since buried its own smartphone plans, the software company continues to work on linking mobile devices with its PC operating system. The heart of the project is the “Your smartphone” (Your Phone) app preinstalled in Windows 10, which is gradually being given new functions. Now the app even enables calls directly on the PC desktop. COMPUTER BILD reveals what is behind it. Click here 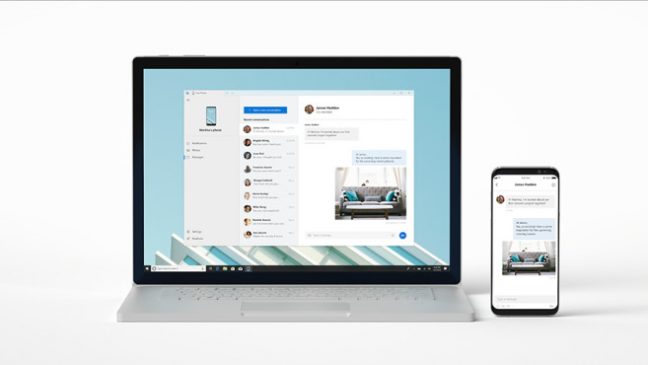 Your smartphone: make calls on your PC

Support for Windows 10 Mobile ended on December 10 – Microsoft’s mobile phone operating system has not received any security updates since then. For a long time now, the company has been trying to connect the iOS and Android devices of its Windows users with the PC. The core of the effort is the Windows 10 app your smartphone (Your Phone), which has been firmly in the operating system since the October 2018 update ( version 1809 ). The program allows PC users direct access to the smartphone – without having to take the device in hand. It works without a cable or Bluetooth connection – simply via the user’s Microsoft account. Initially, only access to photos and SMS messages from the device was possible on the PC, Microsoft has now announced the public distribution of the new telephone function on Twitter. This allows incoming calls to be answered directly on the PC or new calls to be made, and cell phone contacts and conversation history are also available there.

Your smartphone: with notification display

Microsoft had repeatedly improved the app in the months before. For example, a display of mobile phone notifications for WhatsApp, Facebook, and Co. has been retrofitted – Windows users have to use the smartphone less and less as long as they are working on the PC or notebook. To make this completely unnecessary, Microsoft is also working on a function for mirroring the smartphone screen under Windows 10. This function is currently reserved for participants of the Windows Insider program. The company has not yet revealed when Microsoft will release them. For Laptop Repairs

Setting up the function is relatively simple: after starting the app on the PC, the user enters the phone number of their smartphone and receives an SMS there, which can be used to install the appropriate coupling app. Android users need the official companion app for their smartphone. These are not yet available for the iPhone, and it is also unclear whether the restrictions imposed by the Apple operating system Microsoft are putting a spanner in the works. For this reason, the SMS currently refers to Microsoft’s Edge browser, which takes over the necessary coupling with Windows 10. Tip: If you don’t want another browser on your cell phone, you can also use the Continue on PC app to forward websites to Windows.

Your smartphone: pairing via the cloud

After setting up the selected app, the user logs on to the same Microsoft account as under Windows and can now do various tasks depending on the smartphone. While the interaction on the iPhone is currently still very rudimentary and limited to the sharing of visited websites, Android users can, after granting the appropriate permissions, access the photos stored in the cell phone and drag them to the desktop with the mouse. In addition to making calls, the app also allows you to read and write messages directly on your PC. In order for all of this to work, at least Android version 7.0 (Nougat) must run on the smartphone, as Microsoft recommends in the extensive online help.

If you use the Microsoft Launcher on your Android smartphone and are logged in there with your Microsoft account, you now also have access to the new Windows 10 activity history (timeline). To do this, the user swipes the home screen to the right and taps on the timeline – whereupon the Websites visited on the PC appear and can be opened with a tip. With Edge for Android or Edge for iOS, Internet sessions can also be synchronized directly with the Windows counterpart of the browser and thus made visible in the timeline of the PC. To do this, the mobile version must be connected to the same Microsoft account and account synchronization must be activated in the settings of the Windows Edge browser.

Also Read: How To Win A Search Engine Land Award: 9 Questions With A Judge

Your smartphone: Windows 10 can now even make calls

7 Tips That’ll Make Walking in Heels So Much Easier

7 WordPress Tips And Best Practices To Make Your Sites Shine

5 Tips To Look Awesome In A T-Shirt

How To Make a Logo in Illustrator